Ever wonder what patrons are searching for in library catalogs? We have the answers for 2020, aggregated from all the public libraries that use Syndetics Unbound.

These were the top fifteen most searched-for books of 2020 in US public libraries.

The top books above are mostly popular books that stayed popular for much of the year. Others were released mid-year, or went up and down more rapidly. Month by month the top books were:

The Summer of Anti-Racism Books

The George Floyd protests began in Minneapolis on May 26, in reaction to the homicide of George Floyd at the hands of police the previous day. Black Lives Matter protests spread across the country by early June. Librarians responded by compiling and promoting lists of anti-racist titles, and patrons sought them out in the catalog.

The chart below shows the percentage of searches for a number of popular titles. All dates are for the first day of a seven-day week. As you can see, searches peaked in early June, when these four titles alone comprised almost 4% of catalog searches. 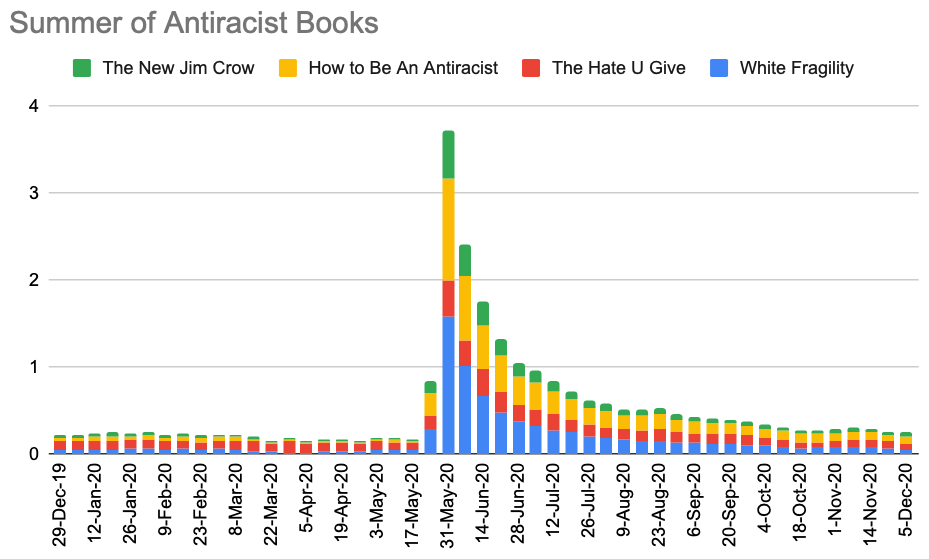 Here are some top-ten most searched-for titles from public libraries around the world.

How Do We Know?

This data was collected by Syndetics Unbound. The search data is fully anonymized the day it is collected. As the Coronavirus lockdowns caused a significant drop in catalog searches, and Syndetics Unbound added new libraries continuously throughout the year, we levelled the playing field by treating all months as equal in size.