Back to The Syndetics Unbound Blog

We recently did a blog post on the Top Syndetics Unbound Titles of 2020, covering what public-library patrons were searching for and finding in 2020. But what about academic libraries? This data was aggregated across libraries using Syndetics Unbound worldwide.

The picture is more complicated in academic libraries than public libraries. First, academic libraries differ from each other more than public ones do. Titles that head the list month after month at technical colleges may not even appear at a law or divinity library. Second, academic library usage is often spread out across larger collections and is less hit-driven. Although books like Delia Owens' Where the Crawdads Sing, Jeanine Cummins' American Dirt, and Michelle Obama's Becoming—top books on the public list—appear on the academic list too, they do so lower, and far lower as a percentage of all academic-library searches.

In place of hot fiction titles, core reference and textbooks dominate. Not only are the Publication Manual of the APA and the DSM-V first and second, but they were first and second in every month of 2020!

As in public libraries, books about race, policing and criminal justice jumped enormously in searches following the George Floyd protests, which began on May 26 in reaction to the homicide of George Floyd at the hands of police.

Unlike public libraries, however, academic libraries saw a second spike in searches as the Fall semester began and these books made their way into many syllabi. This was not just absolute usage numbers, which increase in the Fall. The chart below shows the percent of searches. 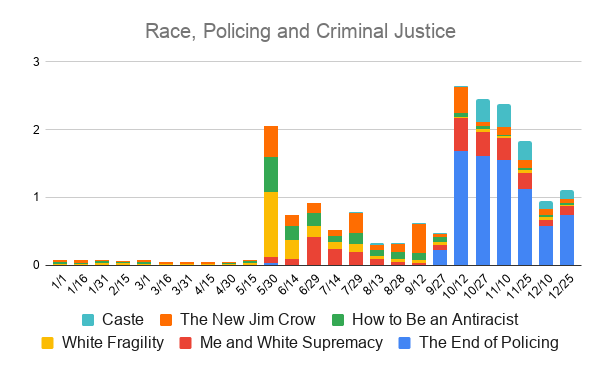 The books referenced are:

How Do We Know?

This data was collected by Syndetics Unbound. The search data is fully anonymized the day it is collected. As the Coronavirus lockdowns caused a significant drop in catalog searches, and Syndetics Unbound added new libraries continuously throughout the year, we levelled the playing field by treating all months as equal in size.